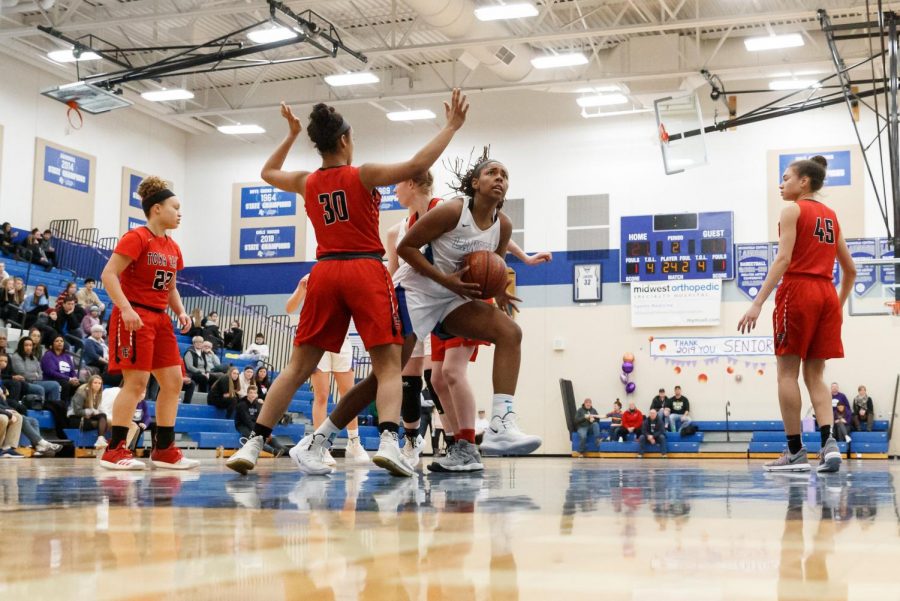 Elise Joplin ('19) looks to the basket amid a sea of red defenders from Tosa East. The girls basketball team won the game 47-30 to achieve a 16-9 record.

The Brookfield Central Lancers Girls Basketball team has won four crucial games in a row against Sussex Hamilton (62-53), Menomonee Falls (55-31), Wauwatosa West (41-34), and West Allis Hale (59-38).
Junior Ellery Prusko on the Varsity team explains that the team’s second win against Hale is especially significant because it exemplifies the team’s hard work and growth; Hale was first in the conference last year and the Lancers lost both times they played them.Prusko also comments that the first game against Hale this year was another highlight because it was one of the best team games, meaning everyone did well; in fact, Prusko cites that there must have been over twenty assists (a pass from a player to another that then scored) that night. The team’s astounding camaraderie contributes to their collective determination to improve, which yields results, Prusko adds. She elaborates, “Out of all teams I’ve been on, this year has the best chemistry, no cliques, and [we] are always dancing and joking around in the locker room. Games can get intense, teammates keep it fun.”

From the start of her basketball career, Prusko’s favorite part of the sport has always been the team aspect, whether it be in Upward basketball in Kindergarten, the St. John Vianney or Junior Lancer team, her club teams, or her high school team. Sure, her dad got her into the sport when she was younger, but she continues for the love of the teams and the love of the game.

In terms of the game, Prusko shares that her favorite part is defense. She feels that it doesn’t matter if you are the fastest or strongest, it just matters how much grit you have, and how much effort you put into defending. She emphasizes that man to man defense is her favorite because it is a personal battle, or little competition, between you and your opponent. Prusko and the team are excited for the next couple games of the season.