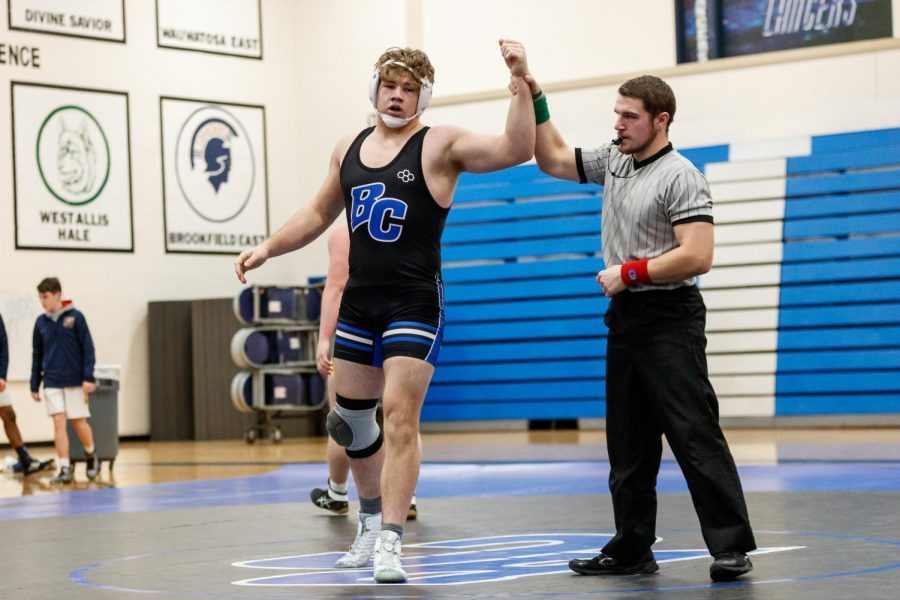 Saturday, February 23, 2019— Senior Jake Somlai was crowned Division 1 state champion in 220lb category. Jake is the first ever wrestler from Brookfield Central to win a state title in wrestling.
Somali was undefeated throughout the season with a record of 47-0 and was ranked 10th in the nation going into the state tournament. After placing fourth at the WIAA tournament in 2018, Somlai went into the 2019 tournament with an all or nothing mindset. “[My mindset was] to win the state title and that nobody could beat me. It was either state title or nothing.” He was the only undefeated wrestler in the 220lb Division 1 tournament. He played three rounds of competition before making it to finals to wrestle senior Reed Ryan from Waunakee. Somlai emerged and took that top spot by pinning Ryan down in 3 minutes and 56 seconds. “When I won I just felt accomplished and [felt that] all my hard work paid off. I was so energetic and happy. I didn’t even sleep”.

Somlai started wrestling in fifth grade when his dad decided to put Somlai into a kids club because he thought Somlai was too aggressive for sports like basketball and soccer. Somlai played football as well but became serious about wrestling in 7th grade.

Competing at the state tournament is not just about the one day there. To be able to compete at the state tournament requires a lot of dedication and hard work throughout the season. Somali had been preparing himself all season for that one moment. The head coach, Mr.Demos, and the other coaching staff prepared Somali for all possible situations. “I’ve been pushing myself really hard all season. I had a lot of motivation after coming up short last year at state,” said Somlai.

Behind every successful athlete is a huge support system. Somali attributes his success to his coaches, Coach Demos and Coach Askren. “Coach Demos has really helped me become the person I am today. Coach Askren helped me make my style of wrestling and [taught me] how to compete.” Somlai would also like to thank his family for their unconditional support, especially his father. “My dad motivated me until I was able to motivate myself. My dad has been their day in and day out whenever I needed him.” After high school, Somali hopes to continue wrestling. At the moment, Somlai has not officially committed to any schools yet, but he is speaking to a couple programs. He plans to be committed by April.

It can be said undoubtedly that Somlai has left a big impact on this school and the wrestling team. “I want my team to know what happens if you put the work in. I hope I left the BC Wrestling team with that work ethic installed into the program.” He wishes well for the future of the BC Wrestling team and hopes that more people will give it a chance in the years to come.