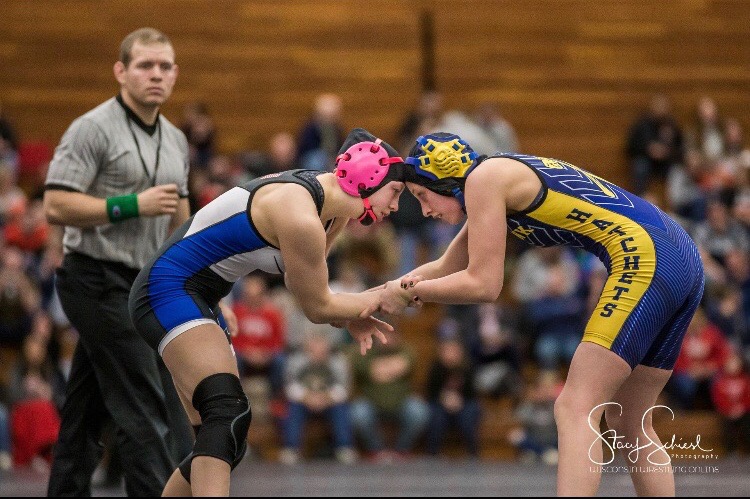 Marisa Roth ('22) squares off against a wrestler from Tomahawk. Being only a freshman, Roth still has four years to continue her variety wresting career at BC.

Overshadowed by several major events along the Brookfield Central timeline, many staff and students are unaware of another State tournament; one that took place on March 3rd, at Marshfield High School. Out of the 97 contestants at the all-girls wrestling tournament, freshman Marisa Roth, a hardworking wrestler who continues to push herself, competed as the only female varsity wrestler on behalf of Brookfield Central. Roth has been wrestling since sixth grade starting at Wisconsin Hills. She has taken part in many demanding wrestling camps such as the legendary J. Robinson Wrestling, a grueling camp that lasted 28 days, filled with countless exhausting drills, which concluded with a 15-mile run. From all the strict diets and harsh workouts over the years, she has learned to adapt to many different situations.

Nevertheless, one of the biggest transitions for an athlete is adjusting to a new coach, a new team, and a new environment. As a result, one of Roth’s biggest challenges was shifting to wrestling at the high school level. When asked about her experience as the only freshman on varsity, Roth replied; “It’s a huge change going from a big 8th grader with everything figured out to a little freshman with no idea how it works. Going against more experienced seniors can be intimidating and taking more losses can be hard but in the end, it’s all wrestling. Someday I’ll be that senior. It just takes time and I’m willing to be patient.”

She continues to keep a positive mindset when approaching the major shifts in her life and does everything she can for the love of this sport. However successful Roth has proven to be, many personal mental and physical setbacks made it difficult for her to get to where she is today. She added that; “State wasn’t my desired conditions and learning to adapt to them and face adversity is something I’ve had to deal with a lot more in high school.”

Even further, the dedication she feels to the sport can be seen with her ambitious goals. When asked about her long-term projections, Roth expressed to; “keep doing what I enjoy while doing it to the best of my ability. As for now, I want to make the world team and we’ll see where I go from there.” In the end, Marisa Roth impressively placed fourth at State. The community at Brookfield Central is excited to see the unleashing of Roth’s potential in the years to come.