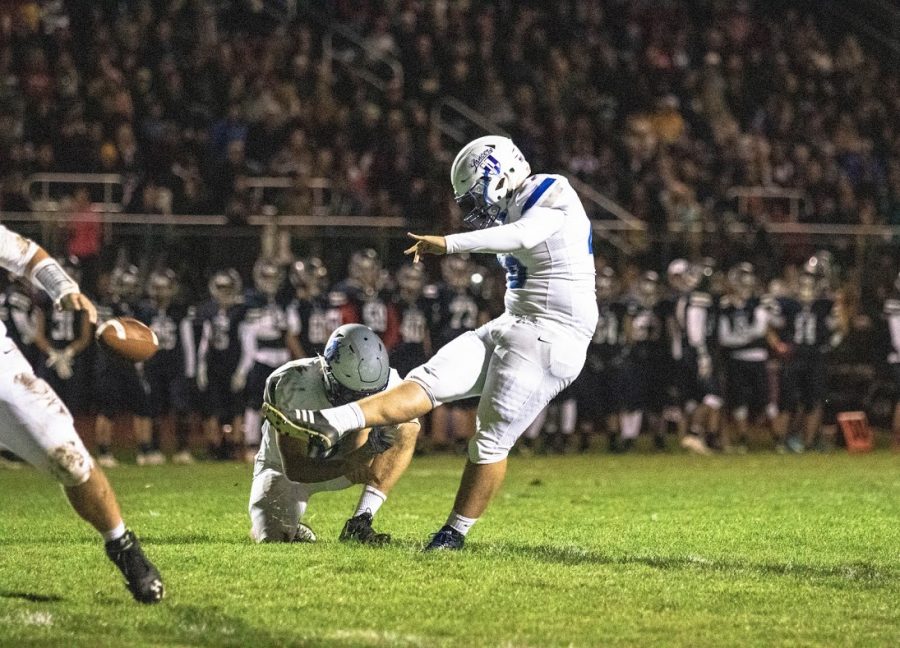 Kicker Charlie Bloom (‘20) starts off the game with a confident kick of the foot- ball. After an exciting night, the game ended with a score 28-14, a solid win for the Lancers. The chant “We own Brookfield!” erupted from the BC student section.

“We can’t hear you!”
This chant erupted from the lively student section of Brookfield Central as the clock proceeded to count down in the fourth quarter. The annual rivalry game between the Lancers and Spartans far exceeded its already lofty expectations, and soon enough, the game came down to a tied score of 14-14 heading into the fourth quarter. From there, senior quarterback Max Hawkins’ creative improvisation involving an explosive nineteen-yard rushing touchdown on third and fourteen allowed Central to regain the lead. A strip-sack by the Lancer defense on the following drive allowed Central to further extend the lead later in the fourth with the help of a forty-three-yard touchdown run from slot receiver Cam Devine. With the victory in hand, a forced fumble only further secured the win for the Lancers, and as the game concluded, the Lancers won with a final score of 28-14.
Although the students of Central may have been nervous throughout various points of the game, the Lancers remained confident in their game plan and preparation. Head Coach Joel Nellis elaborated on this point, stating, “I think every week you feel good, you know. You always go into the game with a plan you feel confident with. We know they are up to the task. I feel confident, but we know we are not overlooking them, and we are being extra careful as we prepare for all the things they are going to do.” This keen attention to detail paid off greatly during the game. The Lancer defense produced three key turnovers, and the coaching staff dialed up a brilliant play call on fourth and six that was executed perfectly by the offense.
In addition to the excellent preparation and coaching, there was an air of excitement in the locker room leading up to the matchup. “Obviously we didn’t have our best game of the season last week, so I think guys are more focused and ready. Any rivalry game with the people across town will obviously be added excitement,” Nellis said. He further detailed, “most of these guys know each other by name, so they are excited to play against some of the guys they have known and played against since youth football.”
Even though the football game itself provided was a great source of entertainment and displayed the insurmountable amount of work put in by the players and coaching staff, the Gold Out game also carried significance beyond just football. It had a massive emphasis on raising awareness for childhood cancer.
Maggie Conlon (‘21) expanded on this subject, saying, “I think that the Gold Out game is a great way for everyone to come together because, within our own Elmbrook community, there have been teachers whose kids have had cancer, our own classmates, and even some family members. I really do believe all the [Central] students understand the message of what the game is, and they really embrace it.”
Nellis also expressed his opinion on the matter. “I think it is awesome that the community comes together for an event like this…I think life is a matter of comparison and you have to look at how great we have it. Being able to shine that light in a positive way and rally the community I think is an awesome experience for everyone to be a part of.”