Jambalaya, Jazz, cajun dancing and nighttime swimming are only a few things BC band students did while on vacation in "The Big Easy" 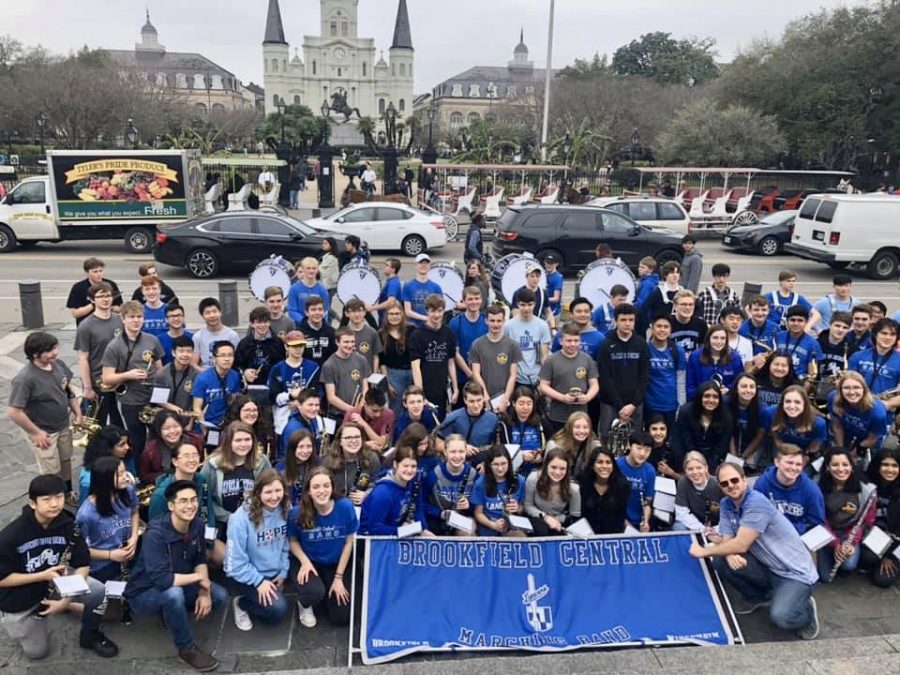 Since the late 1990s, a long-standing tradition for the Brookfield Central Band is to embark on an out-of-state trip every other year. This year, the destination was New Orleans; as the birthplace of jazz music and home to some of the most extravagant parades in the country, it was the perfect place for the trip. What made it even better was the timing: the band departed from Mitchell Int’l Airport on February 15 and stayed for four days, allowing them to spend time in New Orleans during the week leading up to Mardi Gras and fully immerse in the unique culture of the vibrant city.

The band was split into two separate flights, each arriving with enough time for a quick airport dinner. Upon arrival, the band drove to Walmart to buy food, drinks, etc. before arriving at the Holiday Inn hotel.

At 11:00 AM the next day, the band drove to Jefferson Avenue to set up and march in the 5-mile long Mardi Gras parade.

They played the pep tune “Avengers” a total of 38 times as they marched down St. Charles Avenue, with breaks scattered along the route. “It felt awesome and an amazing experience playing in front of thousands and playing with my friends,” says Joey Kubit (‘22).
It was certainly a long day for everyone, but the night had just begun.

In the evening, the band got to eat at and dance to live music at the Palm Court Jazz Cafe. The BC jazz ensemble had the opportunity to perform on stage along with a professional group. Commenting on the experience, Anja Logan (‘20) says, “I think it was really cool to play in a place where all of the famous jazz musicians started outperforming…It was such a small venue that I feel like we almost overpowered the space, and it was a little crowded on stage, but it was worth it to see everyone enjoying our performance.” Logan regularly plays the french horn, but she learned to play the trumpet for jazz band. “The performance made me want to practice trumpet more because it was a lot of fun,” she said, “and trumpet isn’t my main instrument, so it motivated me.”

On Monday the 17th, the band performed pep band pieces at Jackson Square. Afterward, the band was split up into two groups, each engaging in two activities at separate times; one group explored the French Quarter first while the other listened to a jazz clinic at Preservation Hall.

“It was incredible when we walked through the French Quarter because the architecture was beautiful,” Zoe Peterson (‘23) says, When [the people of New Orleans] found out we were from a different state, most of them welcomed us. I would gladly go back there again.”

For dinner, the band was served a home-cooked meal from a world-class chef and a performance by Desi and Wessel Anderson. Several students even willingly got on stage and performed their own impromptu jazz. “It was a little nerve-wracking to play with one of the saxophonist greats,” pianist Sam Patterson (‘21) says, “but it was also an experience I’ll never forget.”

The next day, the band visited the national WWII museum and experienced a 4D movie experience on the major events of WWII. The band went on a swamp sightseeing tour at Bayou Segnette State Park in the afternoon.

Finally, for dinner, the band had Cajun dinner and dancing at Mulate’s. However something happened that night you wouldn’t normally see in classes. The band director, Jason Gillette, jumped into the rooftop pool at the Holiday Inn hotel with all his clothes on for a dare.

The last day the band departed New Orleans to return to Milwaukee. Along the way, they transferred to another flight at Kansas City. That flight was delayed almost two hours and the band finally arrived in Milwaukee around 11:45 PM. This didn’t come as a huge surprise, though, because in the words of Mr. Gillette, “It isn’t a band trip without a flight delay.”

With all that the band was able to experience, it truly was a memorable trip.