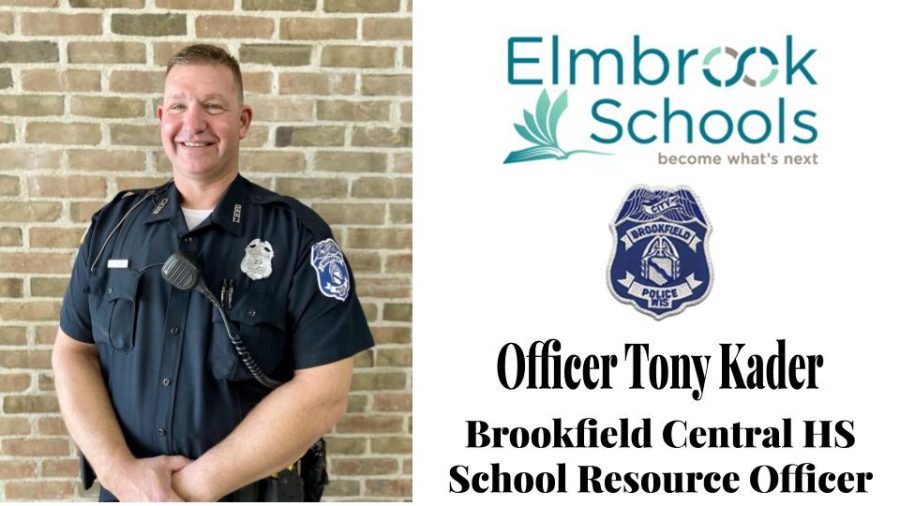 The photo above was the announcement for the arrival of Officer Kader on the Brookfield Central High School Twitter account.

This interview was conducted by Naureen Kamal (‘23) and transcribed by Abbey Turner (‘23). The interviewee was School Resource Officer Kader.

Naureen Kamal: How did you become a school safety officer and how did that dream get started?

Officer Kader: In reality, it wasn’t like it was planned… you know a planned thing, I mean, you know just like anyone else, you have your career choice in life, right. Though I started back in 1997 as a police officer when I finally decided to group up and figure out what I was going to do in life I became a police officer after going to college at WCTC… for a 2-year degree in police science, and then I was hired and elected to go back to college for a 4-year degree in human services so I kinda had some time to fall back on. During that time I really had… you know, I guess a big heart to get into the schools and be with young people, and then like I got into D.A.R.E, I taught D.A.R.E for 10 years. It kinda sparked that interest for me to… a desire or a want to continue that type of process in my career. So, in law enforcement, a lot of the things that we deal with are negative. Let’s be honest, okay, it’s very negative in law enforcement, not because we want it that way but that’s the way the world is, so a lot of the interactions I have with people are a negative interaction. The drive to be with the students, especially after doing 10 years of that in D.A.R.E stuck with me. That was a very fun, interesting part of my career, to know that there’s a very good chance that I’m making a difference in a young person’s life. Being a positive role model, especially in today’s society, and I’d like to continue that. So, as my career progressed, and I got into different areas of my career, eventually, I found out that the Elmbrook School District and the city of Brookfield were going to team together or collaborate together for a school resource officer position.

A little background is Mrs. Kader has been an educator for 27+ years now in the New Berlin School District, so, naturally, I have a desire and a strong heart for teachers and educators as well as the students just because of her, right? Then not to mention I became a dad and I have 2 boys going through school, right? And you tend to look at things differently when you’re a parent vs not being a parent, okay, especially when it comes to young people and challenges that you face as a young person… and I said you know what, when the school resource officer came to me, I went into my captain’s office and I sent him the first SRO. Because I’ve got young people, young boys in middle and high school, facing challenges that you face on a daily basis, I enjoyed the 10 years I had with young people, and I have a very strong feeling and respect for educators in general because my wife has been an educator. So because of those reasons, that’s what drove me to come here and to, really, be a part of your environment.

NK: So, you said that it was mostly your interest to work with students that influenced your desire to move to BC?

OK: Yeah it was… when I was a D.A.R.E Officer, and your students graduate and move on… You start to see them outside of the school setting; basketball games, football games, there’s a lot of opportunities to come to the schools and work, right. So, when you start having students come up to you and say “hey, do you remember me,” well I won’t remember everyone’s name, I mean, you know, look at a school like here, you’ve got 1,300 plus students. When I had someone like yourself come in that’s gonna stick to my brain because that’s a special time for you and me, right? So certain kids… you remember certain young people, some you don’t, but you say “very honest, I don’t remember your name, but what can I do for you?” and they say “You were my D.A.R.E officer, I had the greatest time, thank you so much,” you know, it’s those things that make you realize you make a difference. And so, something else I didn’t tell you before is I was uh, this was several years ago now, an officer came up to me, a police officer, that I work with, she said, “can we talk?” I said sure, and I really didn’t know her yet, she was new… “Do you remember me?” I said “No, I don’t,” and she said, “you were my D.A.R.E officer when I was in 5th grade and now I’m a police officer.” See what I’m saying? … Those are the types of things that drive us. That we care, that makes us better people, that makes us want more.

NK: What really inspired you to become a safety officer in a school?

OK: Really, off that first question, really, all those different points, and then like I said those one or two kids. And it really wasn’t even just 1 or 2. We really… especially young people in general, young people remember that. So just to have those young people come up and say thank you or even more so, their parents. You don’t know me, but my son or my daughter had you as a D.A.R.E instructor and he talked nothing but good about you or, you know, I shared things, or whatever it was. That’s the drive. This is the drive, the interaction, okay. I had, I’m gonna put it this way, more fun in a career in the last 2 months than I have had in 23 years. Just by being here and interacting with your students. I look at you as, as weird as it sounds, my kids. Now, I had 2 boys obviously, right, but, I’m here for every one of you. And I look at you as my students, just like a teacher would look at you as my students. Same thing. So, that’s why I’m here, for you.

NK: Any advice that you would give students, and not just regarding safety, but with maybe just in general, like going through high school, after that, and maybe even just as people?

OK: I’m gonna have to think about that for a second… (pause) One thing that I say to my boys every day… is respect yourself and others. I believe that if you follow that motto then everything will work out for the best. Because it all revolves around respect… Realizing everything you do has a conscience, good or bad. When you react or act, realize that there’s gonna be something that comes back in return. Good or bad. There’s always a kickback. So, it’d be respected, realize that every choice you make, everything you do, is gonna have a conscience.

NK: Would you have any advice specific to like school in general, maybe surrounding the choices of your career path or anything that relates to that?

OK: Something that I’ve been saying and, again, it really was directly at my kids, my boys, even before coming here, realize that right now your job in life is your education. There are people here to guide you through that, to get you on the right path. So I want this answer to revolve around that… realizing that your career right now, your high school education is your career or job in life. Do the best you can now. Give it your best, so it reflects later on in life.

NK: So you did say that you have your daily motto that motivates/ drives you and what you tell your family, would there be anything else?

NK: Are there any more tips that you have and not just physical safety but mental health as well?

OK: You wouldn’t know it by looking at me, because I’m not the smallest person in the world, but a lot of mental health also comes with physical health. So, my suggestion would be, obviously take care of yourself physically, as well as mentally. Daily workout routines include cardio a few times a week, it helps get the negative out of your body. And then eat as well as you can, try not to do all the junk food… and if you are gonna go out on a limb and do the junk foodstuff, moderation. Really what that’s gonna do too is work with your physical health, its gonna help with your mental health and stability also because again, you get rid of the negative influences on the inside of us.